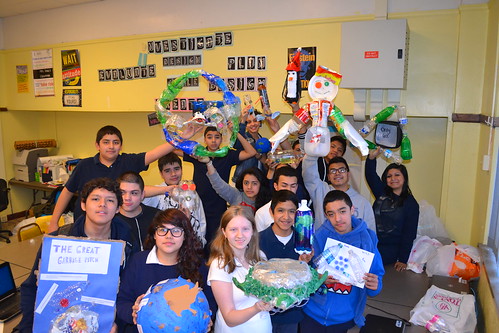 What started as an 8-student recycling club has led to a surge of environmental activism – at Locke Elementary.

“A few years ago, we were barely recycling at Locke,” said Brad Parker, the school’s IB Coordinator. “So we started by creating a “green team” to track and encourage recycling within the school. That team started out with 8 students, and now has close to 60.”

The recycling drive sparked a competition for the greenest classroom, which in turn led to projects like book, clothing, and electronic recycling drives.

“Our first e-waste project resulted in 4,400 pounds of recyclables from our parents and community members,” said Parker, “and the book and clothing drives benefited those families within our own community who were in need.”

The Locke Technology class soon joined the movement, conducting an experiment called the Plastic Challenge. Students were asked to save any bit of plastic they used for seven days, and were astounded by the amounts collected. They then learned some harsh truths about where much of this plastic ends up, and concluded the project by creating political art pieces using the plastic they had saved.

“Projects like this inspire students to act,” said Parker. “They can’t control a lot of environmental factors, like emissions or thermostats, but they can control how much plastic they use in their day.”

Despite the success of these collective actions, the students at Locke became eager to take on a more substantial project.

“We wanted to do something big,” said Parker. “Our IB mission statement is “education for a better world”, and one of the big questions we ask the students is ‘what did you do once you knew?’ We wanted to see what they could do once we’d educated them on the need for conservation and clean energy.”

The “big” project came about through Locke’s partnership with Climate Cycle – a Chicago-based nonprofit that inspires students to “green our world” through environmental education and action. Last year, Locke piloted a school assembly series meant to increase environmental awareness among youth and participated in Climate Cycle’s Ride to Recharge, an event that raises money for “green” projects within Chicago schools. As the top fundraising team in the city, Locke was awarded an array of solar panels to be installed this May.

“Solar energy epitomizes everything we’re trying to teach our students about caring for their environment,” said Parker. “Receiving these panels means that we will be able to power 2 or 3 classrooms on this type of energy alone.”

But the practical aspects are only part of the overall impact.

“This will be these students’ legacy,” said Parker. “They’ll be able to look at these solar panels for years to come and know they were the ones who made it happen. It will help us build on the environmental movement that has become so much a part of our identity here at Locke.”