Currently, Climate Cycle has funded pedal-powered systems in three schools: Curie Metro High School, Westinghouse College Prep, and Ray Elementary School.  These bike generator systems allow riders to power devices in their own classrooms and learn about energy while connecting to the environmental movement. Specifically, the program provisions two to ten bike powered systems which can be used in one classroom or in several classrooms across a school. These systems use regular bicycles, pedal-a-watt systems to transfer energy, and 51 amp-hour AGM batteries which can supply 1500W of electricity. 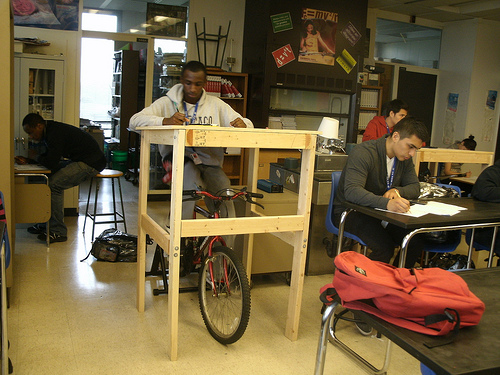 Here is a link to a video Mr. Crone created, chronicling his endeavors. He continues to update and improve Curie’s pedal-power profile. In their grant application, one of our newest school partners, Westinghouse, located in the Garfield Park neighborhood, proposed the following:

“A student team of 5-6 students will tackle the endeavor of finding a place for the bicycles, integrating them into a classroom, and setting up a permanent educational board to explain the scientific concepts for the school public. . . Each year 275 juniors taking Physics will be able to use the bicycles as an educational tool in the Physics “Energy” and “Electricity” units, ensuring that every student at Westinghouse will learn about the bicycle during their academic career at Westinghouse.” In their application, Ray Elementary, located in the Hyde Park neighborhood, proposed to use the classroom to:

Click here to see what the Hyde Park Herald had to say about pedal-power at Ray Elementary.